← Is My Daughter A Nudist??
What Happend To Just Driving??? →

3 Ladies and A Tent

So two of my buddies and I decided it would be a good idea to do a daddy-daughter camping trip.  We all have daughters ranging from 3 to 6 years in age and none of them have been camping before.  A weekend was selected and a camping location agreed upon.  After a week’s worth of negotiations with my wife, we wer finally cleared for take-off.

We made nature our bitch

Rather than take the economic option and carpool, I was forced to take my own vehicle in the event that M could not handle life on the prairie (I conceded this point during negotiations).  This actually ended up being a nice decision because of all of the crap that I had to bring for a one-night  camping trip.

The items required for M were as follows (keep in mind this was a one-night event): M had 2 pants, 5 shirts, 3 panties, 4 pairs of socks, a blanket, 2 stuffed animals, 1 princess miniature camp chair, 1 sleeping bag (princess graphics of course), 2 pairs of shoes, 1 towel, 1 pillow, 2 gallon-sized Zip-Lock bags full of every child medicine known to man.  Turns out that the only item that I was short on was princess band-aids (I was only outfitted with 4, and once one of them was issued, it seemed that all of the girls mysteriously developed injuries), and last, but not least, a little potty for the girls (this had to be one of the most valuable items we had…guess I just assumed that nature-potty-ing came natural to little girls like it did for us boys…I don’t want to even think of the issues we would have had without that miniature miracle of modern convenience…).  In addition to the food items that I was assigned to bring for the group, I had to bring the food items that are M-friendly because she is still a pretty dedicated non-meat-eater.  To say the least, the back of my SUV was crammed full (I think it took longer to load and unload than the duration of the actual trip).

A short two hours (and 3 pit stops) later we finally arrived at the camp grounds.  While we didn’t get the perfect site, we were able to get a pretty good one.  We attempted to bribe the girls with a little snack in hopes that this would keep them occupied while we started setting up tents.  Of course this did not work.  I counted at least 15 times that there was a toddler/pre-schooler diving into the tent as we attempted to set it up.  I won’t even get into how the air mattresses were treated as trampolines…That being said, the tents went up without a hitch.

It was about this time that the third daddy-daughter team arrived (conveniently just after all of the hard work was done hehe).  The only reason I mention the late arrival of our third tandem is that they stopped at the general store up the road from the camp site and my buddy unwillingly made a purchase that would haunt us for the rest of the trip.

Inside this standard little general store, tucked away in the back corner behind the fishing lures and Little Debbie snakes was a little display/dispenser of highly polished, multicolored rocks.  The idea being that you grab a little draw string bag and fill it with your choice of as many stones as you could fit for a flat rate.  Well, my buddy, being the great dad that he is, lets his daughter get a small pouch of said rocks, and any of us would have done the same.  However, what my buddy did not know, what any of us did not know, was that these little rocks would be the center of much controversy amongst the daughters.  You would have thought that this little girl was the Pablo Escobar of geodes with the way that the other daughters reacted upon seeing them…”yo man, how much fo just one rock?”  “I need it, I gotta have it, man” “you got so many rocks, I’ll do anything…cain’t have just one?”  The dialog may not have been quite so Menace II Society-ish, but you get the idea. 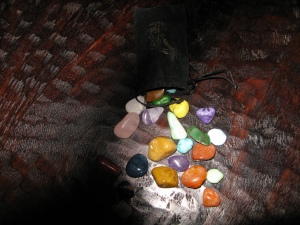 Despite the small spats over the rocks, things were going pretty well.  We took the girls on a nice little hike and let them throw some rocks into the stream.  They would have stayed there for hours if we had let them.  It was not just picking up rocks and throwing them into the water.  No, they had to find the perfect rock. “I have an idea, let’s toss that bag of multi-colored rocks in the creek, whataya say?”, I said…in my head.  It was great to sit back and watch them interact with one another.  My 3 year-old was on an entirely different plane than the older girls, but yet they all agreed on one thing, throwing rocks into the creek is big fun.  Big fun until my daughter looses her footing and takes a little spill into the drink.  Needless to say, our little hike was over shortly thereafter.

We get back to camp and it’s time to get the camp fire up and going.  To the girls, the lighting of the camp fire meant one thing, and one thing only, SMORES!  So we start cooking up some burgers and dogs when we realize that we forgot to bring any type of eating utensils, plates, cups, etc.  Thankfully we were eating a typically hand-held meal, so this was not a huge issue.  It just bruised our all-knowing camping egos.

So, the girls ate a combined total of one hot dog (no bun), 1/2 of a hamburger, and one hand crafted peanut butter and jelly sandwich (one guess as to who ate this…) This might be cause for concern had they not eaten a bucket of trail mix, a bag of beef jerky, several snack packs of goldfish, fruit snacks, and a drank gallon of Capri-Sun throughout the day.  It should be no surprise that dinner obviously did not take long to finish.  Bring on the smores.

The smore feast was a really fun period in the trip.  None of the girls had eaten smores before and it was quite a treat for them.  They had a blast roasting marshmallows although all agreed that they did not like the “black” part.  You can imagine the sticky messes that ensued as the girls picked away the charred exterior of the roasted marshmallows to reveal the melted center.  I think I am still picking sticky goo out of M’s hair…(hold your “Something About Mary” references please)

As the daylight faded to dark, the good times roared on for the girls.  We provided them all with their very own identical flashlight (you would think that this would keep them from fighting over the flashlights…and you would be wrong).  I ended up having to provide my daughter with her own (you guessed it) princess flashlight so that everyone knew which one was her light. Ahh to get into the mind of a toddler…We also had a special treat of glow sticks for the girls to play with in the tent.  (Between the “crack” rocks and the glow sticks, Insert your rave jokes here.) 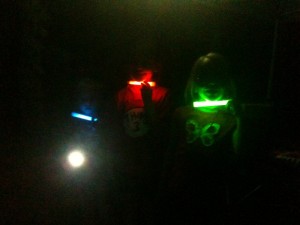 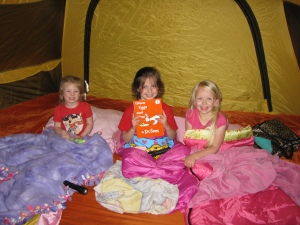 The girls’ normal bed times range from 8:00 to 8:30 PM.  It was around 11:00 PM that the screaming and giggling finally died down and they all passed out.  The daddy’s stayed up until around 3:30 AM enjoying some fire-side beverages, stoking the fire, and solving the world’s problems.

I crawl into my tent and just as I get comfortable I hear the crunching of sticks and leaves outside as someone approached my tent.  Then I hear the dreaded, “Merrit is awake and needs to tinkle”.  Are you F-ing kidding me!  I get up, grab a very groggy and cranky M and head out to the potty.  She does her business and I head back to tuck her into her sleeping bag alongside the other girls.  Of course she would not just go back to sleep, she wanted me to sleep with her.  When I tried to take her over to my tent you would have thought that I shot her dog.  Needless to say, we had two six-man tents and 5 people ended up sleeping in one tent and one lucky daddy had an entire tent to himself.  No, that lucky daddy was not me…

You would think that since the girls stayed up until 11:00PM or later that they might sleep in, but you would be wrong again…After such a late night and the fact that we were short on eating utensils, we decided to scrap the delicious bacon, sausage and egg breakfast that we had planned (and were soo looking forward to!) to opt for the Pop-Tart variety.

As we ate our “fresh” pastries, the daddy types sleep-packed and tore down camp while the daughter types tried to score more crack from one another.  The time was about 10:00 AM when we were finally ready to hit the road home.  You can probably guess our first stop. Yep, that infamous  general store to score some rocks!

and the late night finally gets its revenge...

Ex break dancing champion turned competitive eating loser. I am into prosthetic limbs, knife throwing, and I am a self-taught magician...I once fought Kimbo Slice to a draw, my belly button is known to seep gravy, which has come in handy on more than one occasion.
View all posts by Generic Dad »

← Is My Daughter A Nudist??
What Happend To Just Driving??? →