← Can’t We All Just Get…Well?
Weekend at Jerry’s Place → 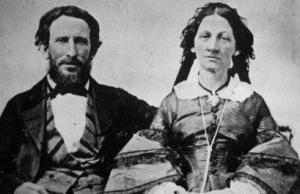 In my last post (https://genericdad.com/2010/09/01/cant-we-all-just-get-well/ ) I teased a review of our first family trip to the mountains of New Mexico.  2 kids, 2 frazzled parents and a wagon full of belongings…

My family recently acquired a cabin in the Sierra Bonita mountains of New Mexico.  Upon hearing this news we decided that we must get up there and check the place out immediately.  The long Labor Day weekend provided just such an opportunity to embark on a most memorable journey.

Is that freedom Rock? TURN IT UP!

Based on previous expeditions, we knew that Lil B was not a good passenger and so we decided to hitch up our wagon and ride to Amarillo late Thursday night.  The theory behind riding at night is simple.  The kids are used to sleeping during this time and they tend to sleep much the same during travel.  The first leg of the journey starts flawlessly.  We hit our schedule to be on the trail by 7:00pm.   The only significant event from this leg of the journey was the awesome Pink Floyd-like lightning show that we were treated to for two hours.  The subsequent huge thunderstorm with high winds and torrential rains was not quite as entertaining.  Regardless, we pressed on and made it to Amarillo in near record time.

After a brief overnight stay in Amarillo, we hit the trail for leg two of our expedition.  This leg of the journey was one of the more difficult to endure for several reasons.  The first reason being that we had joined into and official wagon train with my family and being from a small town, they do not like to ride on major trails.  This forces the wagon train off the beaten path so-to-speak.  In fact, there was a portion of the this leg where the trail degraded from paving-to dirt-to-boulders. Yes, I said boulders…Imagine yourself trying to navigate an unfamiliar trail littered with boulders while the wagon that you are following kicks up so much dust that you cannot see the trail to avoid the larger boulders, so you inevitably hit all of them.  Couple that with a one year-old screaming at the top of his lungs because he is being tossed around like my skid-stained undies in the dryer. Regardless, we pressed on and were eventually rewarded with the site of a beautiful log cabin…where our right rear tire immediately deflated due to the boulder gash it received on the way in.

The next 48 hours are almost blissful enough to make one forget about the arduous journey that had just transpired, nor dwell on the one that lie ahead…almost.  There is just something about being in the mountains that washes away all of my stress and my problems fade to the back of my mind.  I don’t know if it’s a lack of oxygen due to the altitude, or maybe I am just at home in the mountains.  I truly hope that I end up living in a mountainous location some day,  but I digress.  I got to take M fishing for the first time and it was a beating to say the least (could be an entire post of  its own).  However, she had fun with her cousin of similar age throwing rocks and catching crawfish.  She also got to take her first (of many) ride on a 4-wheeler with her Grampy, which she loved.  Lil B was happy just to have someone hold him and he even got to taste test many of the indigenous rocks.  Grammy saved the day by bringing the girls their own new backpacks crammed with activities.  They had a blast.

Of course we knew that the trip had to end, but as we were loading up the wagons I could not help but feel as though we had just gotten there.  The third leg of our expedition got off to a rough start.  We stopped no less than three times to let Cousin A tinkle, then we made the mistake of stopping for lunch in one of the desolate towns down the mountain.  A long hour later we are back in the wagons and headed east to Amarillo.  Just as we reach what has to be the absolute middle of nowhere, we see a sign “DWI Checkpoint Ahead”.  WTF?  That can’t be right, can it?  As we top the next hill we are greeted to six NM state troopers at the intersection of state highway X and nowhere road Y.  I am sure I was missing something, but there just didn’t seem to be enough traffic on the back roads of eastern NM to warrant a six-vehicle DWI checkpoint…thank God I only do heroin.  After the mystery checkpoint we arrive in Amarillo for a brief overnight stay.

The fourth and final leg of the journey was a blur because I had to find a happy place within.  Somewhere between Vernon and Wichita Falls I am contemplating those skiddy drawers again.  Only this time I am thinking of using them to gag my screaming son.  Poor little guy is just not built for the road.  On the bright side I think he may have a future in opera.  At one point of the final leg my 3 year-old had to intervene and put a stop to bickering going on in the front seat.  It is at this point that I check out for the rest of the way home.  The wagon and horses were on cruise control…and so was I.

We will be going back to NM for sure.  However, our wagon training days are officially over.  I love you, Southwest Airlines…and I love your free drink tickets. 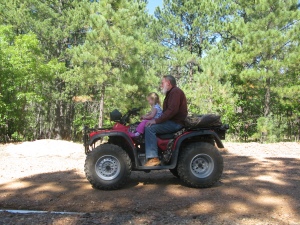 Ex break dancing champion turned competitive eating loser. I am into prosthetic limbs, knife throwing, and I am a self-taught magician...I once fought Kimbo Slice to a draw, my belly button is known to seep gravy, which has come in handy on more than one occasion.
View all posts by Generic Dad »

← Can’t We All Just Get…Well?
Weekend at Jerry’s Place →