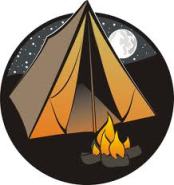 Three dads and four daughters go into the woods…Sounds like the start of a bad joke, doesn’t it?  Unfortunately, this is no joke.  It’s a tale of  extreme weather…foraging…hunting… surviving in the wilderness…(for what amounts to as lest than an entire day)  Enjoy the fail…

It’s Saturday.  M & I hastily throw together a backpack with a few necessities and we are off to start an adventure together.  First stop, Wal-Mart, the land of plenty.  (Plenty of whack-jobs…at least we fit in).  We purchase only the necessities that one might need to survive in the wilderness for almost an entire day. We buy hotdog supplies, s’more supplies, kid friendly drinks, and the rest of the cart is filled with chips, beer and beef jerky…okay, mostly beer.  We checkout and we are off to meet up with our Sherpa’s at base camp.

The journey just to get to the campsite is daunting in itself.  It takes an entire 10 minutes and we are already hot, tired, and frustrated…mainly because we don’t get to hear the end of “Thrift Shop” before we have to park and unload.  (Now we will never know if he bought that broken keyboard…and what about the knee board?)

We opt to hold this years DDG at a local lake and one of the 3 dads just so happens to have a boat at said lake.  It is our mission to hit base camp,  throw the tents up and get out on the water post haste…Of course, this takes slightly longer than anticipated.  Each dad brings his own tent.  One dad is either smart, or just lucky and brings a small backpacking tent that is quick to set up.  The other two of us bring tents that are sized to sleep a small village.  While these tents are only slightly more difficult to set up for a single person under normal conditions.  When coupled with  40 MPH straight-line winds, they are near impossible.  We endure.  Three tents are eventually erected…barely (we had to forego the rain flies on the two larger tents as the winds were just too wild to even attempt that mess.) 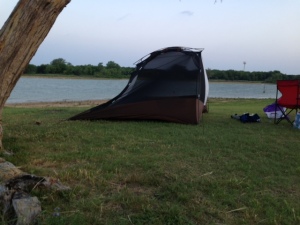 Our tent blowing away

The girls manage to entertain themselves while we dads wrestle with the tents and the wind.  They find a mother herring of some kind that is nesting.  For whatever reason, this herring builds her nest out in the open in the sand on the lake beach.  Of course, the girls see a pretty bird and they want to get near it…so they do.  This mother bird does not like the site of 4 girls prowling around her nest full of eggs and she becomes rather hostile.  After several warnings from us dads about messing with animal mothers, and several run-downs by the momma bird herself, the girls seem unfazed and eventually they run momma off from her own nest!  The next thing we see is one of the daughters running up the beach holding an egg in her hand and cheering as she had just won the last golden Wonka ticket.  Before we even have time to get to them, the egg has been dropped and one baby bird is lost.  After violently explaining to this little girl that she is a murderer and a terrible person (I think one dad even kicked her in the ribs), we force her to wipe her tears away with the murdered fetus and oh look…it’s boat time! (Don’t worry about the girl’s psyche.  We booked her an appointment with Dr. Kermit Gosnell…she will be all better soon)

We get out on the lake and find an awesome little cove that is shielded from the wind…and we have a blast!  The girls take turns jumping off the boat into the frigid, murky water.  The dads take turns shoveling beer and snacks down our fat, unshaven faces.  Our time out in the calm cove has makes us forget the tornadic winds that we were battling at base camp, and for a fleeting moment, we fool ourselves into believing that the winds may have actually subsided.

We get back to base camp and somehow manage to get a sustainable fire going.  I feel like Tom Hanks in Castaway.  We quickly realize that the two house-sized tents are not doing so well in these harsh wind conditions, so we improvise multiple tie-downs and stakes to keep the tents, at least, somewhat upright.

The girls have fun roasting hotdogs and marshmallows in the fire while the dads have fun swilling beer and keeping the girls from falling in the fire.  Only one child catches flame and kudos to her school because she knows to stop-drop-roll.  After getting her snuffed out and resuscitated, she gleefully rejoins the group around the fire.  If you find yourself downwind from her you catch the sweet aroma of charred mammal flesh drifting with the wind.  If this campout takes a turn for the worse, I know who’s getting eaten first… 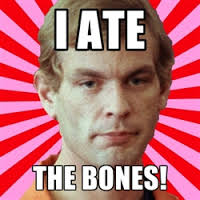 After the great s’more cleanup, we get the girls into their jammies and let them attempt to all sleep together in one tent.  Obviously this does not work worth a damn and we end up sequestering each of them in their respective dad’s tent.  Slowly, One-by-one, they drift off to dreamland.  Meanwhile, us dads sit around the fire drinking ourselves off to drunkland.

Morning comes too soon,  but she is a welcome sight nonetheless.  Groggy and hungover, we begin to tear down camp in the hurricane force winds. (That’s right, the winds never slow…never calm…never stop.)  As we are breaking down our campsite I look to where the girls are playing and what are they doing?  They are effing with that effing bird and her nest again!  Rather than administer more beatings, I just sit down on the ice chest and smile as I watch them play a game of cat and mouse with that poor momma bird.  The girls squeal with both fear and delight as the angry mom chases them away and this warms my stone cold heart to its core.  It looks like breakfast is on Mother Nature today!  “Girls, bring daddy those eggs!” 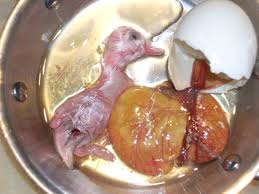 How do you take your eggs? Hatched, or…

Posted in humor, Thoughts on Life